Posts Tagged With: The Louvre

Posted on February 5, 2014 by Maeghan Crociata

Did you miss me? I know you did 😛 This past weekend I was in Paris…. and the city of love was LOVELY! We did Paris right and saw so much in only two days. What a way to kick off the weekend trips with a bang 🙂

We started off Paris a little lost…. Charles de Gaulle airport is not actually in Paris and we had to take the night bus into Paris to get even relatively close to our hostel. And the night bus was EXACTLY like the knight bus in Harry Potter and the Prisoner of Azkaban. Well after that adventure and then fitting 7 girls into a cab, we finally made it to the Caulaincourt Boutique Hostel . For having never stayed in a hostel before, I really liked it and it included free breakfast! 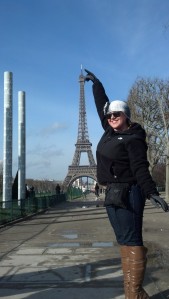 On Friday, our adventures really began! Our first place we hit up was, of course, the Eiffel Tower! And the adrenaline junkie in me convinced my friends to go to the top and what a view. The motto of the trip started from the moment we got to the top: “everything the light touches is our kingdom”. We got to look out and see all of Paris and it was breathtaking (and chilly!) I’m pretty sure I have 100 pictures just of the Eiffel Tower and the view. Once we came down, we had a photo shoot on the green in front of the Eiffel Tower. Obviously. Fun Fact: the Eiffel Tower is mirrored after the Washington Monument, with a big green “lawn” separating it from the Parliament building [or the Capitol Building, in the case of the USA]. You know how everyone takes those pictures of themselves holding the Eiffel Tower in an optical distance picture? If you’re child sized, like I am, you can’t do that. So make sure you’re at least 5′ 4” before attempting to hold the Eiffel Tower. Here’s a picture of me trying to touch it…note the “trying”.

After the Eiffel Tower, we walked towards this beautiful gold domed building that looked like a palace. It turns out it’s actually a compilation of museums, a hospital and a retirement home dedicated to the French military and veterans, called Les Invalides. It was beautiful and had a very French garden that reminded me of Alice in Wonderland. Sadly, we couldn’t go inside.

It was a beautiful sunny day in Paris, so we walked. In fact, we strolled…to the Arc de Triomphe! Another awesome attraction in Paris. I was actually unaware of what the Arc signified — I just thought it was a famous Arc but it’s actually a war memorial to the fallen soldiers that lost their lives in battle. And in order to get to the Arc, which is conveniently placed in the middle of a massive traffic roundabout, you get to go beneath streets and pop out underneath the Arc. It was very cool and we got some great pictures!

To continue with our touristy excursion, we went to the Louvre Museum. On Friday nights after 6 PM, Youths [which is anyone under 24!!] get in for free. And all college students love free! What a cool museum — we hit all the major exhibits including Medieval art, Egyptian and Greek and also saw the two most important pieces in the place. The Venus, who has her own showcase room, and of course, the MONNA LISA. Now for those of you who have never seen my girl Lisa, she’s actually really small. No bigger than a 16×20 poster. But she has glass protection and security guards. Which, for such a small picture, is a sick accomplishment. But in all honesty, the Monna Lisa was absolutely awesome and I felt like I was in The Da Vinci Code. I easily could have stayed there for a day and just roamed around [but I feel like that with most museums!] That concludes day 1 of our program….

…Day 2! We got up bright and early to continue to explore Paris. But first, we made a side trip to Versailles. Versailles is how I imagine my summer home to be — you know, cobblestone everywhere, huge statues, gates made of real gold. All that stuff real princesses should have. And we didn’t have to pay for the ticket to tour the palace and gardens — yay more free excursions! There was so much to take in at the palace — ceiling artwork, beautiful, ornate furniture and portraits. It was definitely an old school glamorous field trip! And then the gardens stretched for miles — again, rendering the quote from the Lion King. Fun Fact: there is a quote on one of the walls in a bunch of different languages that says “Everything in Versailles has been modified at least 10 times”. And it’s so true! There were two exhibition rooms plus the main fountain that were under restoration and the place is under constant upkeeping.

In Memory of
Monique Tartt
age: 18

Upon our return to Paris, we visited Notre Dame which is overwhelmingly beautiful. And I got a personal shout out from the security guard for taking pictures in the middle of the church while people were praying before mass…oops. But I got the good picture. However, Notre Dame was hard for me because the night before I learned that one of my friends from home, who was very close to my younger brother, had passed away. She was an absolute sweetheart with a smile that could light up a room and I lit a candle for her to pray for her and her family. Then afterwards, we went to Sainte-Chapelle to see the stained glass windows our professor raved about! But the windows were being restored and the church was closing just as we got there 😦 I was disappointed we didn’t get to see it but that just means when I come back next time, I’ll have to visit 😉

After all of our excursions, it was arguably the most important part of the trip: CREPES. The 5 of us were absolutely ravenous by the time we got to the crepe shop but it was a great decision to wait until our last day to get them! We all ordered savory crepes and mine was so good, I didn’t know if I should eat it slowly to enjoy it or scarf it down because I was so hungry and it was so good! I had a crepe with cheese, eggs and chorizo from Basque Country — which is in Spain! Ohmygosh it was amazing — just thinking about it makes me hungry! And what’s a good meal without dessert afterwards? We visited Berthillion’s Ice Cream Shoppe that had authentic, handmade ice cream and was so good and so worth it. It was especially meaningful to me because this little adventure was a suggestion from my parents who had visited Berthillion’s on their honeymoon! [Shout out Mom and Dad!] And of course, we had to get a picture to send to them and show them how good their suggestion tasted! We highly recommend it!

Wow that was long! But we did a lot in only 2 days! And when you all go to France, make sure you give me a shout out for giving you the wonderful suggestion of Berthillion’s Ice Cream! 🙂