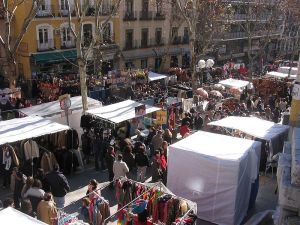 Yesterday was a local day where I spent all day outside doing Madrid things. First, I went with Jessica to El Rastro. El Rastro is a huge open flea market in La Latina every Sunday. At least 7 blocks are lined with kiosks selling everything from T-shirts to Pashmina scarves to old Spanish comics to religious statues. We trolled around the place, looking at everything and starting our very long list of souvenir shopping. This is one of the local attractions of Madrid and a great way to spend Sunday morning/afternoon. Cuidado: the place gets PACKED by noon so going early has less crowds!

After lunch at our favorite Durum Kebap place, I met up with Gabby and we travelled to the end of the green line to go to the Madrid Zoo/Aquarium. This zoo was unlike any zoo in the United States. The first thing we noticed was that there aren’t exactly high fences keeping in these animals, especially for animals that can jump and leap like antelope. There was no net or fence or anything, just a small ledge. And the antelope were everywhere, just casually. This zoo was also less organized than all other zoos. Stumbling upon the antelope, then we passed black bears, zebras and giraffes and emus. None of those are in the same family or found in the same area of the world! Another thing was that it is perfectly acceptable to throw peanuts at the animals — I only thought that was a thing in the movies! But the zoo was great and we saw so many animals, including a huge dolphin display that looked like SeaWorld. Each of the dolphins had scratches and scars on their skin and fins, which made us realize why the zoo had so many different types of animals from all over the world. This specific zoo is a rescuing zoo!

We had a great time and a lovely day in Madrid, just doing local things! It’s nice to spend time in my own city, ya know?