Did you miss me? I am so sorry for all of my loyal readers but I have been travelling and experiencing for 12 days straight and only now am I getting a chance to write about my adventures!

Directly after spring break, we had final exams [boo hiss] but were rewarded with a 6 day trip to the North of Spain [and Portugal!] to celebrate the program coming to an end. So on Day 1 [April 25] we geared up and headed from Madrid to Cantabria. It took everything I had not to jump out of the bus while it was moving — the drive was 9 hours. Yeah, I don’t do well sitting still for that amount of time. We got to Cantabria and pulled into a little village and had lunch by a marina. It was chilly but still pretty and

there was a beautiful mountain view, but we only spent a few hours there. Then we got back on the bus and drove an hour more into Asturias where our big red bus drove into a very, very narrow dirt road and pulled up to an isolated hotel with its own private beach that we stayed in for two nights. The beach had a grotto and walking in the sand and among the rocks gave me the first taste of summer 🙂

Asturias is farmland and on this particular day, rainy farmland. There is nothing around for miles, which is what makes it pretty and quaint. But me personally, I could never live there. To start off Day 2, we left the hotel that morning and drove into the mountains to Covadonga. History Lesson: In 711, Don Pelayo was the first king to fight against the Muslims and his victory in the Batalla de Covadonga was the first step in the Spanish Reconquest. In Covadonga, we climbed into a rock tunnel and up to a small church built into the side of the cliff, where there was mass going on. Could you imagine if your home parish was in the side of a cliff?! It was beautiful. Then we went down to the Lagos, or 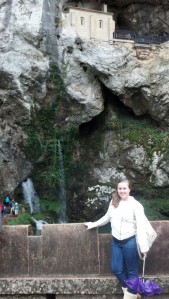 Lakes, of Covadonga. The Lagos is one of the prettiest natural sites I’ve seen during my time in Spain and there was a fountain with Holy Water, as the lakes are flowing with blessed water. After that, we saw a big statue of Don  Pelayo and a small church. This church was unlike ones we have seen on previous trips — this one was austere and dimly lit but still beautiful and reverent in its own way.

After that, we got back on the bus and drove out to the countryside to a Sidra factory. Sidra is a special type of fermented apple juice that is famous in Asturias for the way they pour it. Click here to see a video of how Sidra is poured! We saw the apple orchard where our guide, and the owner of the farm, picks his apples to make sidra. He took us to the troughs where the apples are juiced and barrels where they are fermented and then are bottled. We got to eat a traditional Asturian lunch in their backyard and each got a chance to pour Sidra and drink it, too! Being in that backyard was like being at  a family reunion. I loved the atmosphere and all of us laughing and eating showed me how much of a family our program had become, despite how dysfunctional we are.

Day 3! We packed up our stuff and got on the bus to travel to another province, but not without seeing ancient cave art! We bussed it to a small town called Ribadesella and ventured into the Cueva de Tito Bustillo. IT WAS AWESOME! No pictures allowed because flash could distort the original colors on the rocks. I had never been in a cave before and we walked 15 minutes into the depth of this cave, probably to the center of the earth, with massive stalagmites just like in the movies. Then we got to the drawings and they were very realistic! These caves had been discovered by a bunch of teenaged cave hunters, one of which was Bustillo, who tragically died while cave hunting and had the cave named after him. The cave paintings were determined to be at least 15,000 years old. There was a purple horse, a mammoth and even a reindeer drawn in what looked like charcoal on the side of rocks inside the cave. I wish I could have taken pictures but I did buy a magnet of the horse and postcard of the cave, which is the closest I could get to a picture.

Then we were off on our horses and travelled to the next province…Galicia!
[Did you see what I did there about the horses? I know you smirked, I know you all did]