At the end of February, Audrey and I took a relaxing vacation to Brussels, Belgium right before midterm week began. We once again ended up in a country that speaks French — third time is the charm! 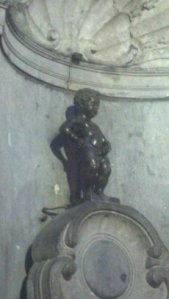 We finally got to our hostel after almost an hour of travelling there from the airport and immediately hit the ground running….by getting Belgian beer and waffles! The beer in Belgium is really good and a lot better than the cheap stuff they sell in Madrid. For the rest of the day, we explored the city center and stumbled upon one of the most prized symbols of Brussels. Personally, I think this statue is the dumbest thing ever and I have no idea why the Belgians pride themselves on it. His name is Manneken Pis and he is approximately 2 feet tall. You may be thinking to yourself, that’s a statue of a baby peeing. Yes, yes it is. Mannekan Pis is so popular for some unknown reason in Brussels that for holidays and special occasions, he gets dressed up. He has over 800 outfits! Let’s just talk about that — the statue of the peeing baby has outfits.

Moving right along….in the city center there are a bunch of boutique chocolate shops! So we went in every single one and trolled around until someone offered us free samples. And they all did! Belgian chocolate is on point. But the first night ends really anti-climatically because we had to go back to the hostel and study for midterms. What good students we are, right?

On day 2, we became real tourists. Like REAL TOURISTS. We got on the big red City Sightseeing double decker bus and rode around all of Brussels. Our first stop we hopped off at was the Atomium. The Atomium

is a huge statue of an iron atom blown up like a zillion times. It’s weird but it’s another symbol of Brussels. The cool thing about it is that you can go inside it and learn about science stuff and famous Belgians that helped contribute to this project and other discoveries in science, architecture etc. It was pretty cool. And there’s an elevator that takes you to the top…but it was obviously bad weather and the elevator was shut down.

We got back on the bus and rode around but nothing else was interesting on that line. When we got back to the starting point, we got on the second bus and did another tour of Brussels but different districts. This time, when we hopped off, we were at the European Union headquarters. What an awesome place! The actual EU was closed because it was Saturday but we trolled around the premise and took pictures. But you know what was open? The Parliamentarium! What’s a Parliamentarium? It’s a museum about the European Parliament! It was totally free and totally awesome. When we got there, we got iPhones. Just straight iPhones with headpieces. By scanning the information screens on the exhibits, the iPhones would start speaking and showing a picture or video slideshow of the information about the particular exhibit. Super interactive and very cool. I was really impressed with the museum. At one point, I looked at Audrey and said “I keep forgetting there is no USA exhibit” and she was thinking the same thing! I mean it’s logical that the USA wouldn’t be involved in the European government. ..Right. That was a lot.

Brussels proved to be a much different experience — we didn’t know a lot of what was there and there was no set itinerary so we just walked around and relaxed. And studied, which proved to be very worthwhile during midterm week!

I know this post wasn’t as exciting, but I promise the next one will be! What does that mean? Stay tuned 😉 you know you love me xoxo